Ed Stafford, 43 years old former British army having endured hard life in the army decided to give it a trial at the street  London, Manchester, and Glasgow some of the harshest places due to unpredictable rain in most days. For the next 60 days, he would have to be resilient against all odds to complete the self-devoted task.

If history was something to go by, Ed was going to make through just like he did in 2012, where he walked the gruesome water of the entire Amazon River, making him enter the Guinness Book of World Records for the first man to do so. Former British Army captain, would he make it through?

From Grace To Grass

Having been promoted from mere officer cadet to captain in the army, which he earned due to his outstanding performance. Ed had already achieved what most people in the first world would really wish for; he had married a beautiful woman, so he was living a happy life with his lovely family in a big mansion he had built.

He owned a dog that would accompany them in their nature walks. With all that, he decided to devote his life in abject poverty for 2 months in the streets of Europe. Will life in the street be more challenging than in the Amazon River or even live in the army? There was no turning back. He was ready to face it all.

Welcome to the street

To give the world what it feels and it takes to live in the street, Ed only had a camera crew, one set of clothes and a sleeping bag. Also, to challenge himself to the limit, he took no cash, implying that he would rely on everything in the street.

Previous research done in 2018 had shown that more than 320,000 people were homeless in Great Britain; this translate to every 200 people 1 is homeless. This study pushed Ed to the street to have the feeling of how it feels to be homeless and living in the street and not knowing what tomorrow would bring.

Ed had not prepared for all these things. The first night was the toughest being used to cozy bed then to a sleeping bag is not all easy.

The situation was worsened, considering that in Manchester it rains most days, so he had to look for a way to keep him comfortable throughout the night. It would be a total lie to say he slept that first night. Unknown to him in the next days to come, he would meet the most amazing people in the least expected way.

As the day went by, Ed discovered one could make more money than a decent employed person if he was smart enough in the street. Look at the case of Mark, whom he bumped on him on the street of Manchester.

Many people looked at Mark as a typical homeless beggar in the street, but the reality was that he was a divorced and professional painter who had run away from his broken family to start a new life in the street by sweet-talking people to give him money. On a good day, he could make good cash, which would afford him a good meal from the eatery if people that day were not generous enough to offer him food.

When Ed arrived in the street, he thought that he was going to search for food in the dumpster, how wrong he was. In the street, there were thousands of people willing to share their meals with homeless people may be on the belief of the Holy script “share the little you have with the less fortunate and Hand that giveth is more blessed than receiving hand”.

The most amazing scene in Glasgow was the case of 26 volunteers competing with each other to feed two homeless people. No wonder in the period he was in the street, he gained 11 pounds.

A model in the street

Like in a forest, all types of animals are there. In the street, Ed came across many different scenes, for instance, in Manchester, he met Dina, a former model and a mother of six kids.

She was a very innovating lady, to keep herself warm and secure from the harsh wind during the night she would make makeshift shelter made of cardboard. Ed confessed this lady was the most creative of all he mingled within the street.

To Ed, Dina looked like that innocent model; surprisingly, she had to take some illegal stuff to start the day with.  Most people, as Ed was to discover, were either involved directly or indirectly in illegal doings. This forced police officers to conduct a frequent search to eliminate those illegal activities and also to get rid of homeless people from the city center.

In his days in the streets, he was roughed up by policemen for being found receiving money and food. He was released and given a final warning.

In the street, you can sleep anywhere, but when it comes to cleaning up, it becomes very challenging. Ed would spend many days without refreshing up, and he had to use toilet water to do the washing, and to change cloth, he had to use bathroom cubicles.

But with all these challenges, Ed would find tranquility in the company of Dina, they would spend most of the evenings together watching the moon. Pretty sweet in such hard time.

A human being is conditioned to adapt to any condition provided he accepts it and develops the mechanisms of how to live with the situation. During the 60 days of documentation for his TV show, Ed developed the survival mechanism he even started to enjoy staying idle, watching people passing by.

That feeling of irresponsibility and not abiding by any rule was really intriguing. Contrary to the common notion that street has only aged people Ed comes across Jeff 26 years old mentally challenged young man who was enthused to change his life.

To change his situation, Jeff would stand by the high-end hotel and request people for some coin, in just one hour he could make a good 26 dollars. Unfortunately, instead of Jeff using the money to change the situation, he would go ahead to use it for illegal substances.

Being more experienced and mature, Ed felt he had to do something to change the situation of this young man; He organized a council meeting at Manchester Town Hall which Jeff was pleased to attend the next day.

At a dead end

During the next day as agreed, while at the entrance of Manchester Town Hall, Ed called and send several messages to Jeff but the phone call and text went unanswered.

Ed concluded that Jeff had changed his mind at the last minute and did not want anything to do with him. Changes are always good after having stayed for some days in Manchester city he felt he should relocate with his crew to London.

In London Ed encountered several rough sleepers in the West End District where he had decided to set up his camp.

Being new to this big town he decided to give it a try and see how people in this town would react when they saw him begging money along the street. For 5 minutes, 72 people had passed by him and none said a word leave alone giving him any penny.

Not everybody would appreciate the things we do and the reasons why we do them. While at the city of London, a lady passing by discovered Ed’s crew and she was very mad.  She attacked them with harsh words screaming that he did not have a story to tell. 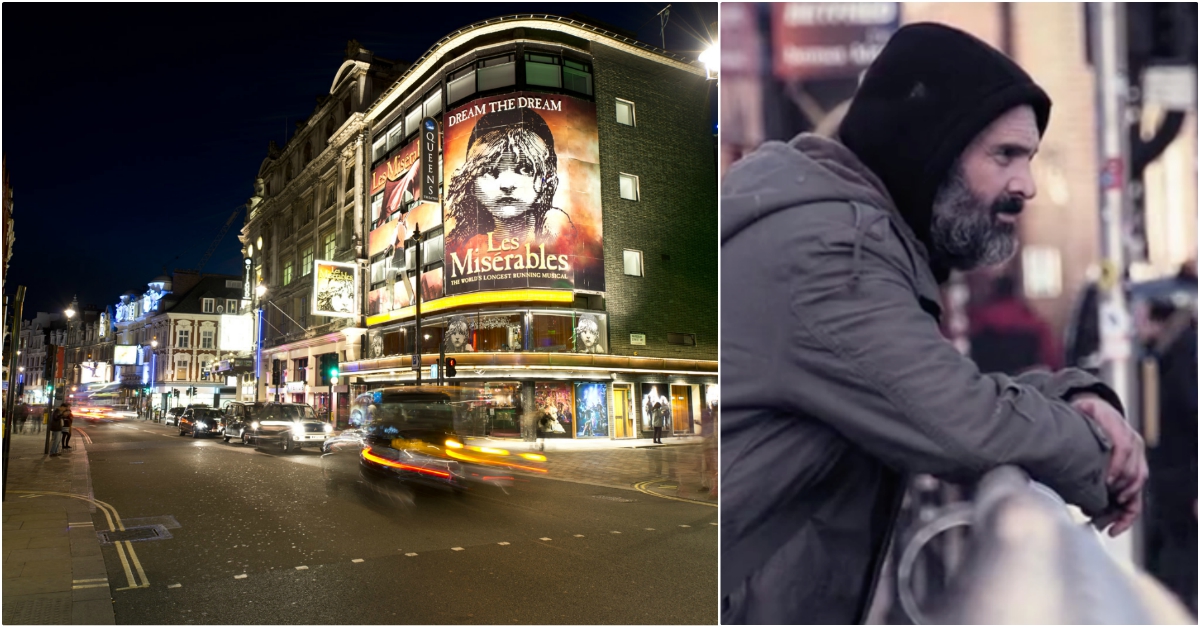 While at London, Ed stumbled on a certain beggar who was unlike other he had come cross, this beggar was not homeless he was just on the streets to make easy money.

Darren confessed to Ed that during some good nights he could make more than $800 just by walking and begging money from people. This kind of money to most employed people could only be dreamt for a single day earning.

When Ed thought he had heard seen all from Darren, but Darren then invited him to his home. Ed was astounded with what he saw, Darren had classic sound system and video game consoles and everything typical person would have in his house. To have this kind of room he must have invested a lot of money.

Ed later learnt that this house had been given to him by the government after his prison term so the only thing he did was to revamp which he really did it well.

Having experienced life in Manchester and London, Ed traveled north to see how life was like there, to his amazement situation there were quite different during the night, the street were empty. Where were the homeless vanishing to?

Ed came to learn that Scotland HouseFirst policy and been implemented, they had set up homes for the homeless where they could get shelter and hot meals each day. Being homeless he was directed to one where he met with different people with amazing stories.

Knoxy a Glaswegian almost of the same age as Ed and had spent 18 years on the streets of Glasgow. He ran away from a broken family. In the street he had found himself on the other side law due to various reasons, he was determined to see his life change.

Another Glaswegian Ed comes across had the same story to tell. This was an ex-prisoner who had been kicked out of the Glaswegian Shelter community Ed was able to help him do something about his life.

Having helped Knox and the ex-prisoner, it was time to say goodbye to street life. For the last 60 days, he had been on the street, so now there was a need to call it a day and head home after covering the three Great Britain Cities.

His wife was eager to see her husband back. Afterward, he continued with his normal life having achieved his dream. This experience changed his mindset about the homeless community.

Having stumbled on so many different rough sleepers, Ed learned the hard way, not all homeless people are technically homeless. Therefore, different types o people should be treated differently.

The only challenging thing is to know which one is a fake homeless person and which is a genuine one. To be the on the safe side, give no handouts.

Hollywood in the 1950's cut a very different landscape than it does today. Though there are ...

Hollywood is known for its larger than life and blockbuster movies. The movies have been breaking ...